Here, the food is exceptional, but the company is even better.

Each day, residents of The Davis Community will receive complimentary continental breakfast. Lunch or dinner is available and can be shared with old and new friends! You can use your culinary credits at a number of venues around campus. 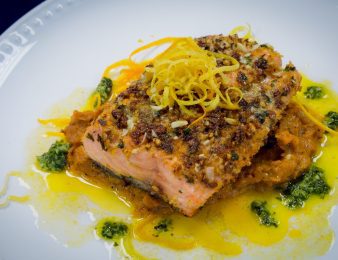 Our newest upscale Southern restaurant will be opening in 2022 and provide old-fashioned favorites as well as lighter modern fare. Named for Champion Davis’ mother, the menu will make you eat your vegetables. With items like baby back ribs, jumbo lump crab cakes, crème Brule and lots of fresh produce, the menu is sure to please all palates! Take a look at a sample menu!

For a more casual meal, Nibble’s Cafe will offer quick and healthy salads, sandwiches and snacks.

If you need a gallon of milk or small toiletry item between trips to the grocery store, you can stop in at Salty’s Market – The Davis Community’s own general store.

Named after Champion Davis himself, McDowell’s Pub will be the go-to place for drinks and camaraderie.

At The Social Club, residents will be able to socialize with friends while tasting the latest in seasonal cocktails and beers! 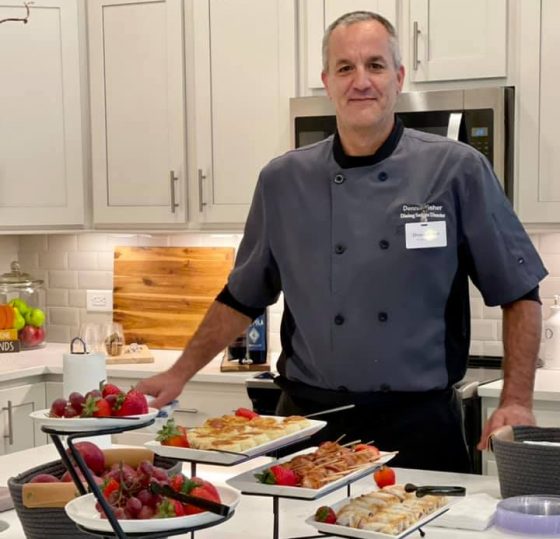 Dennis Fisher is the new Culinary Director and Chef for The Davis Community. He was born in North Jersey into a very large Italian family, where cooking and family was a way of life. During college, Chef Dennis found himself cooking for his friends and trying to create dishes that were a different take on some classic foods. He enjoyed cooking so much he left school and enrolled in the Culinary Institute of America in Hyde Park, New York.

After graduating from the Culinary Institute of America, Chef Dennis got his first real cooking job at Croce’s Restaurant in downtown San Diego, California, He stayed in San Diego until 2000 when he accepted a job with Marriott in Bethesda, Maryland. He worked in private country clubs throughout the Washington DC / Virginia /Maryland area and even had his own place in West Chester, Pennsylvania called, Fatt Cat BBQ & Crabcakes. When a growing young family made running a restaurant less appealing, Chef Dennis went to work for The Compass Group and Morrison Senior Living as Regional Executive Chef for the Northeastern United States.